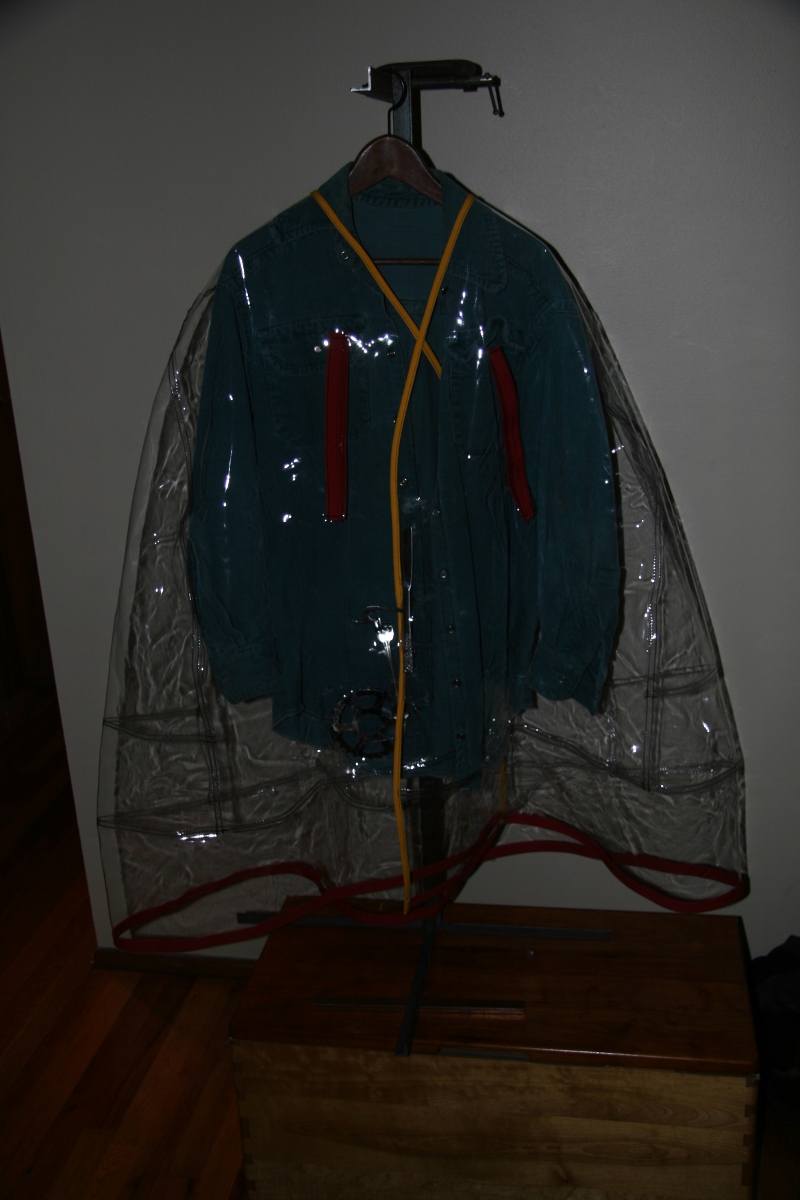 This clear plastic rain cape was hand-made to be gifted to the joint Intel and Oregon Museum of Science and Industry (OMSI Portland) Childrens Christmas Gift Exchange that was held at OMSI during the 2013 Christmas Season.

As I am single and have no children, I had to make a guess at an appropriate size for a teenager, with an additional requirement that it could be worn by both a boy or a girl; ie; a unisex garment.

As someone at OMSI suggested to me, I also wanted to require myself to hand-make everything, including the closure as well as the opening for the hands.

There is an interesting history of this closure. Although the idea of doing something original came from an OMSI volunteer, the actual idea itself came from a very old inspiration. I saw a very fascinating one-of-a-kind woman's cold weather cape (made for for an exhibit than a useable garment) as part of some sort of fashion art show at the old Filenes Basement Store in downtown Boston.

The closure on that cape was constructed of Sterling Silver by a silversmith in the Boston area.

The design of this garment itself has an interesting pedigree.

In the late 1970's I lived in the Polk Street area (known as the Polk Gulch), which was very popular for gay hustlers See here for interesting article.

One of these hustlers wore this beautiful transparent cape to keep him dry yet let his beauty shine in the rain.

I asked him where he got it, and he told me one of his customers gave it to him.

Little did he know that he gave me the idea for this gift.

Unfortunately, I was not feeling very well during the Intel and OMSI evening event at OMSI (not suprising as I had just rode a bicycle 20 miles in the cold rain to get there), so I was forced to leave a little early and I did not find out who the lucky child was receiving this unique gift. However this does not matter. All I need to know is that there is a part of myself somewhere out there and that the people from both Intel and OMSI were very appreciative of this gift for their Christmas Gift Exchange.

If you were the gay hustler on Polk Street in the 1970's wearing that clear plastic cape in the rain, please email me at allyn (at) well.com and let me thank you personally!