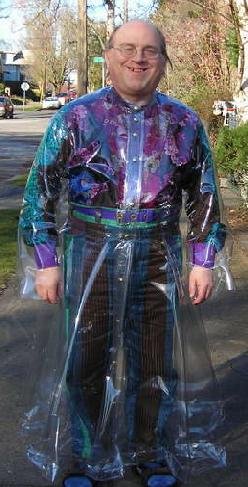 I was at an estate sale in 2006 and I saw some new clear plastic shower curtains that looked like they were never used.

They had no price on them; the people at the estate sale said I could have them for free since they were going to throw them away.

This clear raincoat is constructed of those shower curtains in less than three hours.

Since this vinyl was fairly thin, I was carefull to use full double, or 'French' seams throughout the garment and all seams were properly anchored in the hem, the collar, and the cuffs. In addition, I used vinyl glue to seal the ends of the thread onto the vinyl to prevent any unraveling.

These precautions allowed this garment to wear well without any hint of thread freying or seam splitting. It had lasted for several years of my own use and then I gave it to a friend who still uses it in 2012.

There is a very telling and funny incident that happened to me a few years after making this coat.

I had learned that Prada, the well known fashion designer, included clear plastic raincoats in their fall collection. I was also told that I could see one of their raincoat at the Mario's store in Seattle, Washington. Mario's is a very high end clothing store.

These Prada raincoats were priced at about $900.00.

I took a special trip to Seattle to see those coats. I wanted desparately to see how a high end fashion designer designs this type of rainwear and what lessions I can learn as a hobbiest and novice custom clothing craftsperson.

Arriving at the store, I was so shocked at what I saw that I had to literally run out of the store in disgust.

The Prada raincoats used only single seam stitching. They did not use the double, or 'French' seams as I do.

Furthermore, the seams were not anchored in the hem. In fact, they did not even do backstitching to secure the ends of the seams nor did they use any glue or sealent to secure the thread.

On one of those five or six raincoats, one of the side seams was already pulling apart. Yes. Right here on the display rack, the coat's side seam had pulled apart for about two inches off of the hem.

I lightly took the coat off the rack to handle it so that I could feel the quality of the vinyl and the workmanship. As I did so, another stich of that bottom seam started to come loose. I very gently had to put that coat back and back away from the rack.

The vinyl that used, by the way was at least as light as the one on my coat that was constructed from those free shower curtains, if not thinner.

Shocked, I felt that I had to get out of there. Fast. As I was about to wet myself laughing hard!

By the way, if you work at the Mario's store, please be assured that I do not fault you for this poorly constructed garment that I saw. It's not your fault. The fault lies squarely with Prada, the designer, who most likely have contracted with an inferior contractor to perform their fabrication of their garments. The only thing you can do is to return the garment and demand that they send you clothing that does not fall apart on your racks.

Lession learned here is that no matter the prestige the designer, the workmanship can still be shoddy.