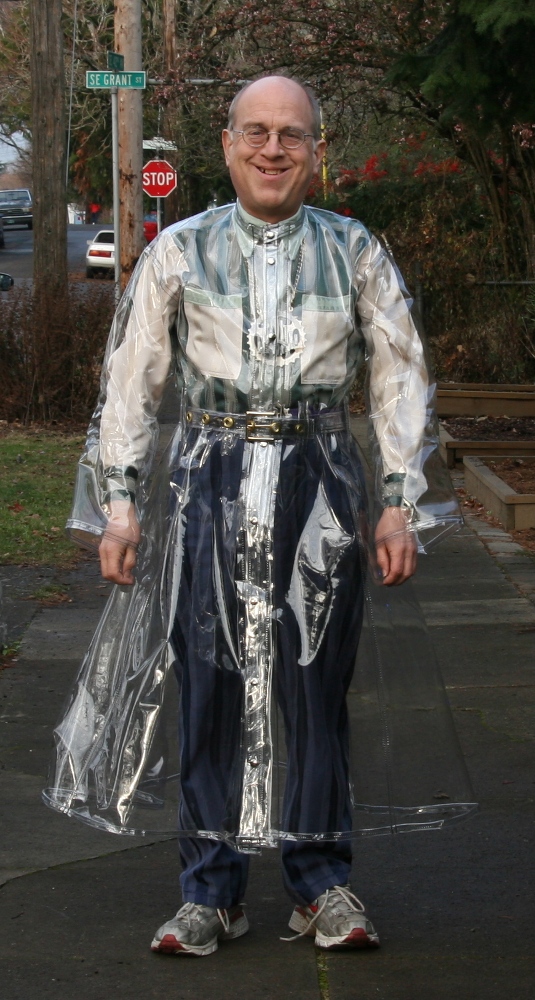 Yes another 'freebie' project that outlasts clothes that I have bought.

I was at the Goodwill Outlet store in Portland; a place that many people call 'The Bins' during the winter of either 2008 or 2009.

For those of you who are not familiar, The Bins can be a rather dreary place with very scungy merchandize. You need to realize that this is the place where the stuff that is either rejected or unsold by other Goodwill stores in the are ends up.

So, amongst the piles of very old and worn clothing, I saw this pile of very clean heavy clear plastic.

I draped it over myself to look carefuly at it (people did look at me a bit strange) and I found it to be in pristine condition. I am guessing that someone must have bought some clear plastic slipcovers for their furniture and decided not to use them after all. Thank you, whoever you are!

The cashier asked me what I was going to do with all this plastic. I told them that I want to make raincoats with it.

She smiled at me and gave it to me for nothing!

What you see here is one of two raincoat I made from that plastic.

The one raincoat that I kept (which is the one in this picture) held very well for three years and showed almost no sign of wear. I have had store-bought clothing that did not last that long.

For about three hours of time and fifty cents worth of plastic, I cannot complain.

I had loaned this coat to a friend who wanted to use it as part of a dance scene in a play that he was putting on.

He had told me that it may be torn because they were going to do some grabbing and shoving as part of the scene.

I said that would be no problem as I had had this coat for more than a few years and I would not mind if it was torn.

When they were through, I got the coat back and it looked like it was not even worn at all. It was pristine clean. No stitches were torn in the plastic!

I was shown the video of the dance scene and indeed, the person wearing this coat was grabbed at and vigorously swung in circules by others who were holding him by only the coat. That plastic must have supported over 100 pounds of force during that scene.